Transfer Learning in natural language processing is an area that had not been explored with great success. But, last month (May 2018), Jeremy Howard and Sebastian Ruder came up with the paper – Universal Language Model Fine-tuning for Text Classification which explores the benefits of using a pre-trained model on text classification. It proposes ULMFiT, a transfer learning method that can be applied to any task in NLP.  This method outperforms the state-of-the-art on six text classification tasks.

In this blog post, I will explain the step-by-step working of the method proposed in this paper.

ULMFiT uses a regular LSTM (without any attention short-cut connection or any other complex addition) which is the state-of-the-art language model architecture (AWD-LSTM, Merity et al., 2017a). The LSTM network has 3 layers. (Edit: You can find my blog post giving a walkthrough of the AWD-LSTM paper here – What makes the AWD-LSTM great?) This single architecture is used throughout – for pre-training as well as for fine-tuning.

There are three stages in ULMFiT  –

We will discuss each of these stages in detail.

This step is analogous to the ImageNet pre-training in computer vision. Since language modeling (next word prediction) can capture general properties of a language it serves as an ideal source task for pre-training a network. The network is pre-trained on Wikitext-103 (Merity et al., 2017b). It consists of 28,595 preprocessed English Wikipedia articles and 103 million words.

Instead of directly using the Wikipedia pre-trained model and fine-tuning it for the classification task, there is an intermediate step involved. In this step, the language model is fine-tuned on data from the target task (on which classification will be performed). This step improves the classification model (discussed in the third step) on small datasets. The paper proposes the following methods to achieve this step-

Slanted Triangular Learning Rates
The target text (here, the text on which classification needs to be done) has a different distribution than the one on which our language model has been pre-trained. The goal for fine-tuning in this stage is to make the model parameters adapt to the task-specific text features. For this, the authors propose slanted triangular learning rates (STLR) in which, the learning rate first increases linearly and then decays linearly. STLR is a modification of the triangular learning rates (Smith 2017) with a short increase and a long decay period.

Intuition – An initial short increase in the learning rate is required because we want the model to quickly converge to a suitable region of the parameter space for the target task. This is followed by a long decay period which allows for the further refining of the parameters. Hence, using the same or an annealed (decaying) learning rate would not be suitable. 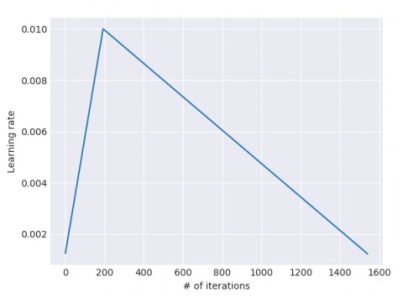 The update schedule for the STLR can be given as –

Discriminative Fine-Tuning
Jeremy first introduced discriminative fine tuning as differential learning rates in his course – fast.ai, Part1 2018, Lecture 1. The basic principle behind this is that different layers in a model capture different types of information and hence require different learning rate. The initial layers capture the most general form of information. Here is an awesome visualization toolkit on this.

Similarly, in a language modeling task, the first few layers would have the most general information of the language and would require the least amount of fine-tuning (change in their weights). Subsequently, as we move towards the last layer the amount of required fine-tuning would increase.

The final stage in ULMFiT involves training the model with two additional linear blocks. ReLU activation is used for the intermediate layer and softmax for the final linear layer. Each block uses batch normalization and dropout.

Gradual Unfreezing
The target classifier fine-tuning is very sensitive and an aggressive fine-tuning may lead to nullifying the benefits of language model pre-training. Therefore, the authors propose gradual unfreezing for fine-tuning the classifier.

BPTT for Text Classification (BPT3C)
Similar to backpropagation through time for language modeling, BPTT for text classification is introduced. The document is divided into fixed-length chunks. At the beginning of each chunk, the model is initialized with the final state of the previous chunk. Gradients are back propagated to the batches whose hidden state contributed to the final prediction. In practice, variable length backpropagation sequences are used (Merity et al., 2017a).

(Edit) A big thanks to Jeremy Howard for the shout-out 😊

This is the best walk thru of our NLP transfer learning paper yet! 😀
Thanks @yashuseth for taking the time to write this up and share it. https://t.co/3BrwIP5Goa

View all posts by Yashu Seth

What makes the AWD-LSTM great?

Who was the lead character in Friends? The Data Science Answer